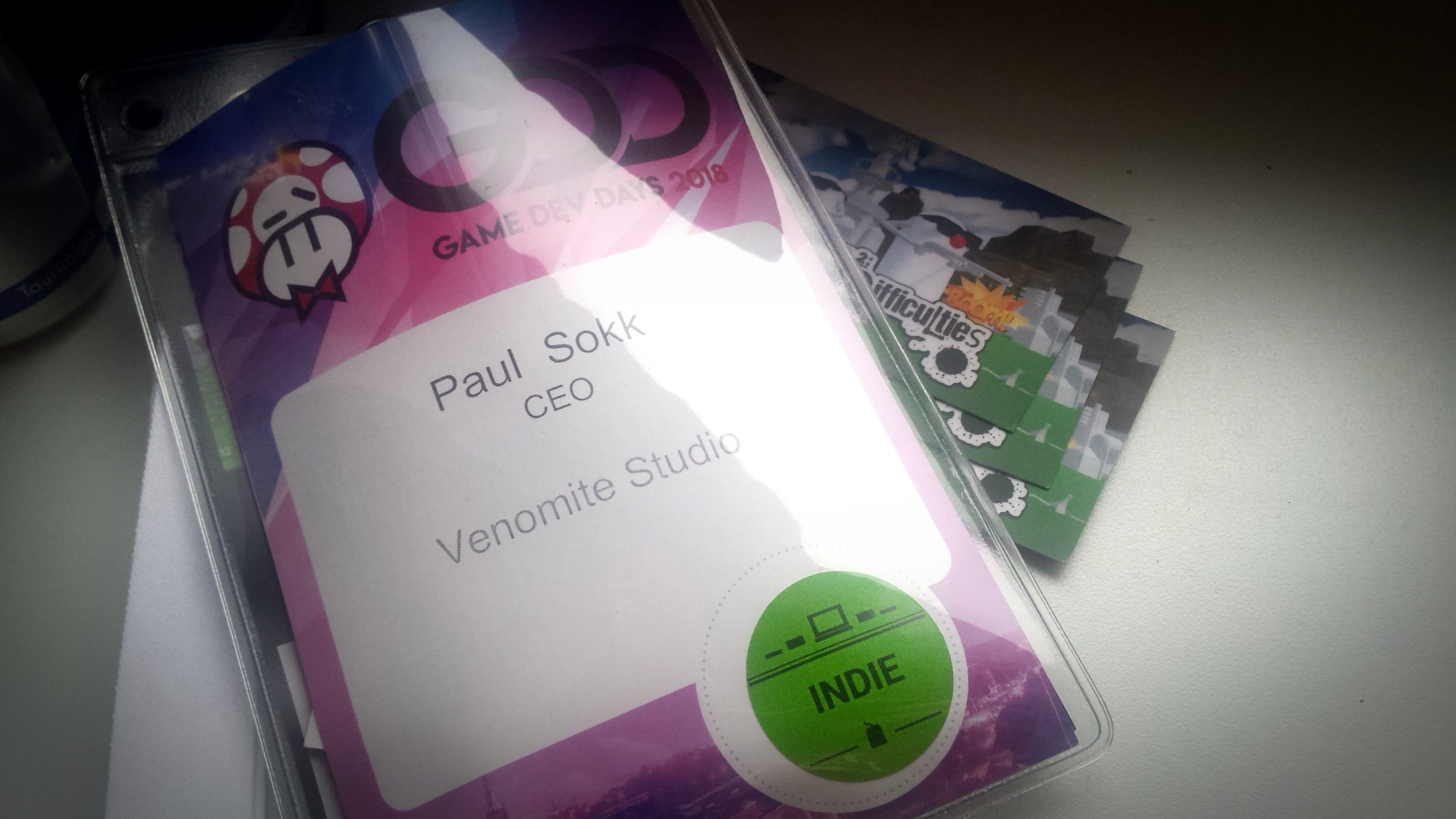 My whole journey has been advancing towards the Game Dev Days 2018 conference. I started building a multiplayer real-time strategy & first-person shooter hybrid game 6 months ago to present at this event. I managed to build a prototype, that displays the game’s core features, yet feels quite raw to the eye. Before showcasing the prototype at the Game Dev Days (GDD) event, I went through a number of challenges. I described these challenges in my previous blog post, that I feel you should read before continuing with this one.

Feedback from the players

Similarly to MängudeÖÖ, Mechanical Difficulties had a showcase table at GDD where people could come and try the game. The crowd at GDD was much more hardcore – publishers, experts, business people and just other game developers. Like I mentioned in my previous post, the feedback from GDD was quite different from the one I got at the MängudeÖÖ. In fact, it was even better! After you had described people how to play, they would usually play for 5-15 minutes, some even up to half an hour. And after playing, 90% of the people who had tried the game stood up and said “Damn, this game is really fun! And I love the concept!“. What made people enjoy the game noticeably more was when they tried it with a friend. The trolling factor (banana peels and impact mines) really shined and made people enjoy playing against each other a lot more.

A large part of the time, I was at business meetings, talking to people who might be interested in business partnerships with Venomite Studios. While I was away from my table, my partner Annika kept things running. I am immensely thankful to her. Without her, the conference couldn’t have gone as well as it went. Thank you, Annika! 🙂

Business meetings are good for sitting down with potential future business partners and discussing in peace how both parties can help each other. It’s similar to speed dating, usually, you have only 30 minutes to discuss and then somebody else might want to meet at your table already.

Generally, my meetings went well. I learned a lot from all the experts when I pitched my game. Some said straight away, that Mechanical Difficulties wasn’t a game for them. Yet, some found it very interesting and wanted more information, incl. a playable prototype and a gameplay video. Some were skeptical when hearing about the idea. They weren’t sure if the game would be fun to play. But when I took them to my booth to try the game, they were amazed. I have really captured the fun aspect with Mechanical Difficulties.

In the midst of all the showcasing and meetings suddenly a lady appeared and asked “Paul, would you be willing to give us an interview?“. I said “Yes” and in a few minutes, I had a bright light blinding me, a big camera aimed towards me and a microphone in my face. I don’t remember much from what the reporter asked. I just remember telling them about Mechanical Difficulties and how I moved back in with my parents to pursue my dream. The news story is in Estonian, but if you want to see it, you can find it here.

The story they made was about the Game Dev Days conference in general. I just find it funny, that most of the story’s footage is of me and my game. 😛

Overall the event went tremendously well! I got loads of suggestions, powerful connections, confirmation that the game is awesome and great opportunities. Presenting the game was exhausting, but extremely rewarding.

I went to the event without a totally clear business plan. I had some ideas in my head, but none were completely thought through. I got some good feedback on my vision and realized I needed to make the business side much clearer to myself. So right after the conference, I had (Skype) meetings with several experts I could reach on the topic of start-up business funding. I am really grateful to all the people who were willing to freely share their knowledge and help me out. Their contribution will not be forgotten.

I will need to do some planning and will announce the next move of Venomite Studios in a future blog post.

The events didn’t end there, however. Last weekend I showcased Mechanical Difficulties again at another event called Playfair. Stay tuned to read how it went there.