MängudeÖÖ – Leading Up to the Game Dev Days 2018

HomeMängudeÖÖ – Leading Up to the Game Dev Days 2018 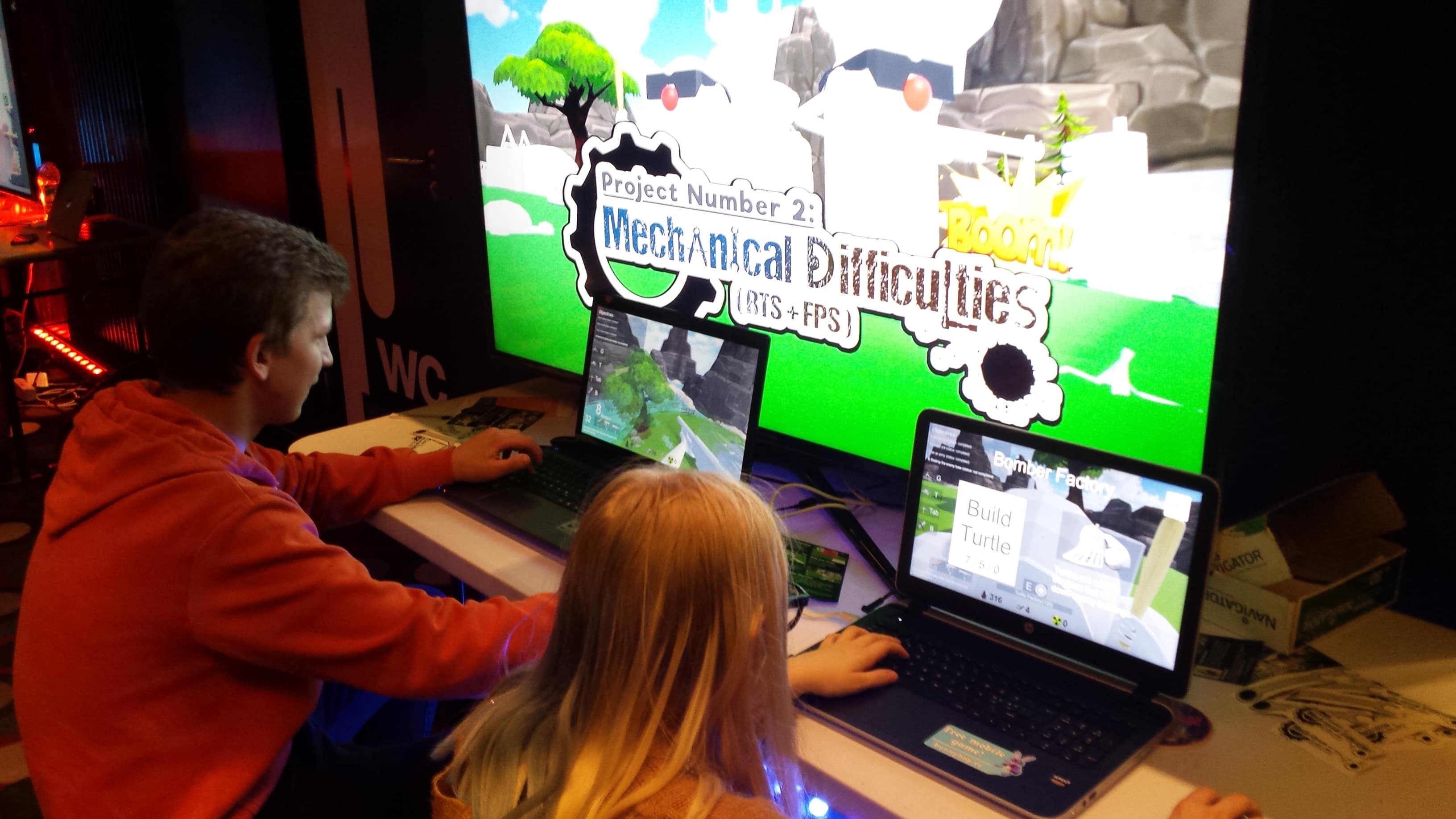 It has been such a crazy two weeks, preparing for the Game Dev Days and attending other events. Even so crazy, that I haven’t had time to share my thoughts on what has been going on. So now I’ve gotten a moment to catch my breath and gather my thoughts.

I will split the post into two parts – the first describing everything leading up to Game Dev Days, and the second describing Game Dev Days and the thoughts after it. Enjoy!

If you have been following my blog for a while, you know that I was developing Mechanical Difficulties for 6 months. I would conclude the development journey with showcasing it at the local game developers conference called Game Dev Days 2018 (i.e. GDD). With the feedback from GDD, I would then decide my next move.

Let me give you a little overview of what showcasing your game at a game developers conference is like…
Imagine a big area like a bunch of conference rooms, a cinema or a concert house. There will be hundreds of people going around, talking and admiring all the new technologies and games. There will be a separate hall for indie games where every team/studio gets a table to show off their creation. The developer will have to come early and set up your booth for all the visitors. You are best off setting your booth up for what you go there to achieve.

I had multiple objectives: acquiring new fans, getting the Studio’s name out there, receiving feedback, and being open to business opportunities.

Generally, the people that pass by my booth fall into either of the following categories:

I spent a lot of time, prior, preparing all the merch for the final game developers conference. In total, I ordered 200 business cards, 10 shirts, 500 flyers and 400 stickers (200 of each design). The mission was to make as large a presence as possible when showcasing my game. I want some people in 3 months to be like “Venomite? Hmm… that sounds awfully familiar. I’ve heard of it somewhere.” Designing and ordering the merch went pretty smoothly. (If not counting that I managed to center the game’s logo a little too much to the right on the business card 😛 oh well…) I had done similar things a year ago when I was preparing to showcase my first game Bunnyhop. So I have specific companies I turn to now when I need anything and I know how long it takes to get the merch on hand.

I took the game to several events to prepare for GDD. To GameLab, a game developers club I help run and to IGDA Estonia April gathering. I wanted to see how players play the game and learn from them what I needed to change, to guide players towards playing how I want the game to be played. One thing I noticed was that many people didn’t figure out they had to build their base right at the beginning. (Even tho that’s the whole point of the game!!) 😀 They just ran around guns blazing to kill the enemy. Not their fault, really. The game should teach the player how to play and have rules in place that prevent playing incorrectly. So my quick fix was adding a simple instruction in the middle of the screen when players started the game. And it made a huge difference!! All it took was a little nudge in the right direction 🙂

It’s fascinating to analyze and experiment with user groups and see how some little things can change their experience so much! Here is something that could have been game-breaking. The last game development update I did, I didn’t have LAN option in the game. What that means is – every time you wanted to play, you had to play over the internet, through Unity servers. So you had to have wi-fi or a cable connection. I predicted it was a bad design because you can’t always rely on public wi-fi. It became painfully clear when I tested the game at one of the GameLab’s hackathons. The host launched the game without a problem, but the client timed out (was kicked out) before joining because the internet was too slow.

This seems almost too obvious… It would be stupid to put all the bets on an event’s wi-fi, where all the people have devices that might want to connect to the router. So I made a completely different lobby menu, where players can only host and join LAN matches. This enabled me to just connect two computers with a standard network cable and have them play a multiplayer match without having an actual public internet connection.

Needless to say, when I watched and helped players play my game, we stumbled upon many bugs. In fact, some were so game-breaking, that if they hadn’t been discovered before GDD, it would have been a disaster.

For example, while adding match end detection, I had managed to break respawning! So when the enemy player killed you, you couldn’t become alive again at your home base. You just stayed dead.

It was a constant cycle of testing and fixing until no more bugs appeared. I was sure Mechanical Difficulties was working good enough to present at larger events. But just a few hours before showcasing it at one, I noticed that the Turtles didn’t do any damage to the Iron Drill and the Turtle Factory. That was some stressful last minute fixing! But I got it working just as I was supposed to leave for MängudeÖÖ – a really big event where I also showcased my game.

Presenting my game at MängudeÖÖ

So if I considered the GDD to be the finals, then MängudeÖÖ was the semi-finals. It is a videogames’ event where people go to watch and play at tournaments, try different games, listen to commentaries and just have a good time. Several hundred people go there every time and it rapidly keeps growing in popularity. MängudeÖÖ was the first event where I let people outside my close circle play Mechanical Difficulties in front of me. I got to watch how the actual target audience reacts to my game. It was a blessing. Exactly what a game developer needs! And how did they react?

THEY LOVED IT!!! 🙂 I’m so happy! When they sat down to play it and after I had described how to play, they really had fun! I could just leave them there for 5 -10 minutes and come back, they would still be there laughing and squealing, trying to beat their friend.

An unfortunate downside is that I had to do a verbal introduction to every new player. Mechanical Difficulties currently does a terrible job of describing players what they have to do in the game. That is something I will have to put on my to-do list. 😛

I came home with a warm feeling in my stomach. It sounds silly, but as a developer, I couldn’t have been sure before, that the game would click with my target audience. Now I knew, I had been heading in the right direction. People had fun! 🙂

The feedback I got from GDD was different tho…

I’m going to cut this story short right here. I don’t want a blog post to get too long and boring. I will post the rest of the story describing my thoughts and experiences on the GDD in a few days. 😉