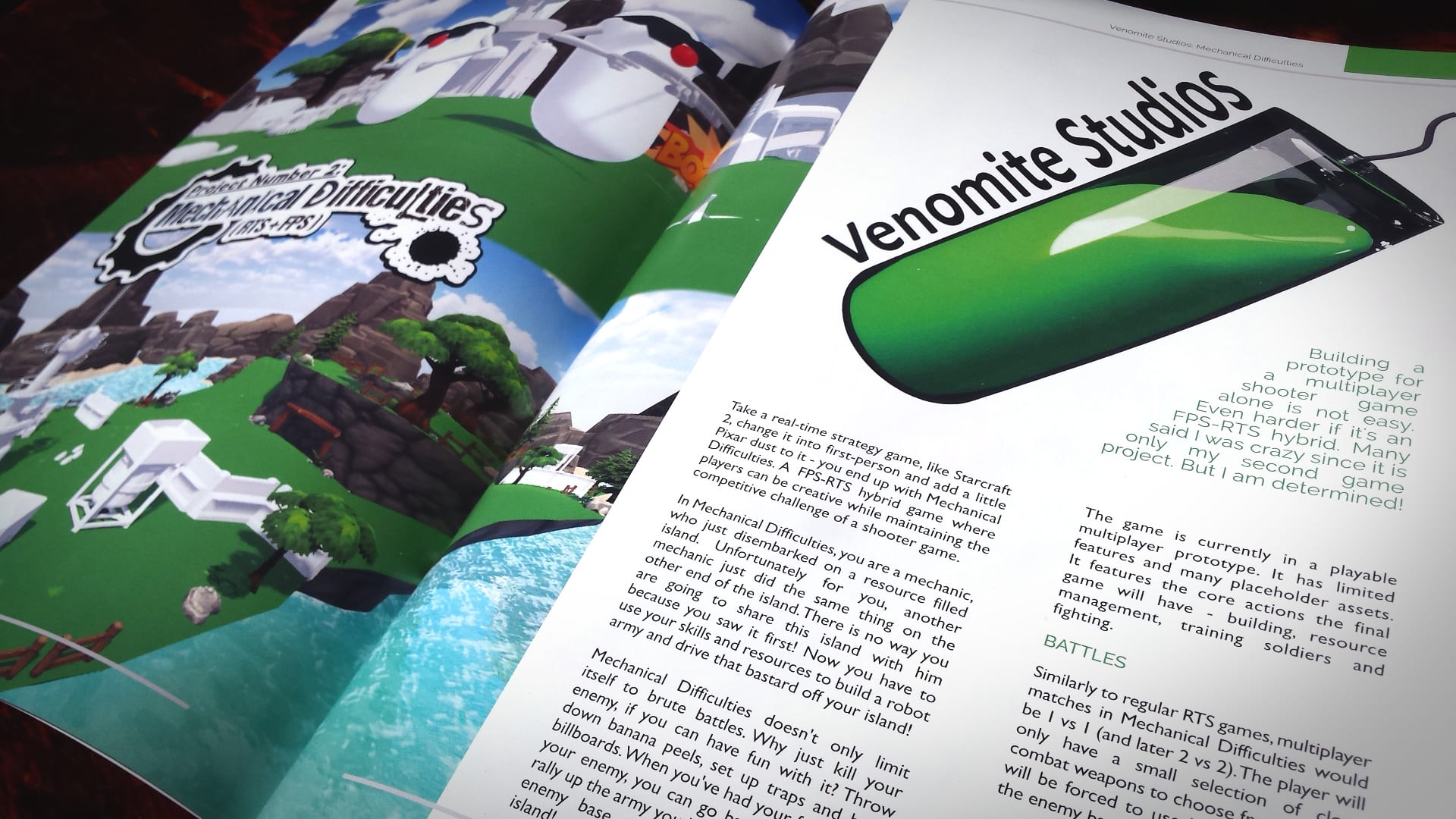 To be honest, this is a story that could have been told a lot earlier. But because I didn’t have any pictures to show you back then or was too busy preparing for Game Dev Days, I’m going to tell it now.

The one and only magazine where you can read about the Estonian game development achievements and ongoing projects – Estonian Gamedev Magazine. It is printed only twice a year and I got to write a big article there for the 2018 Spring’s issue. I was really lucky to get these few pages of ink because this magazine travels to several game dev events around the world, and my story could reach some really influential people.

That being said, the article didn’t come without its struggles. When it came to writing, I didn’t have much trouble. I’ve probably told or written down my story over a couple hundred times now. However, finding visually appealing art was an issue. When I first learned about the possibility of having Mechanical Difficulties in this article, I was just working on update #4. If you look back, you can see that the art wasn’t all that nice back then (image below).

As you already know by now, I decided to spend some money on some environmental assets after that. Making Mechanical Difficulties look a lot better in a short amount of time. Solving that issue wasn’t the end of my struggles, the players still looked like tic tac mints. Usually in game development, before an artist starts creating a complex 3D object for the game, he or she gets sketches or drawings of what that object should look like. Usually, that drawing is made by a concept artist and is called concept art. Concept art is also often used to convey a game or a movie idea before it is built into the real thing. So that’s what I needed, a concept art for the characters of Mechanical Difficulties.

I started my searches at several Facebook groups where I believed to find some concept artists lurking around. I drew a (bad) sketch of what I had in mind and put together a small collage of images that I found online. My objective was to give some direction, but still leave a lot up to the artists. In essence, the search was a competition. I couldn’t spare any money on the art, so all I could promise for the best artwork was a spot in the magazine and as much publicity I could give from my blog and social media feeds.

So a few weeks went by and the deadline I had set was approaching. Some amazing art started to roll in. My friend Julia Iljina was one of the artists that participated and here is what she put together: Another artist Anna Khudorenko also presented her work. But to my surprise, she didn’t only draw one character, she drew TWO! 😀 After some thought, I decided to go with Anna’s concept art and I announced her to be the winner. One of her drawings ended up decorating my article in the Estonian Game Development Magazine. I’m really lucky to get my story in the magazine because it might open some doors in the near future. That was all possible thanks to the amazing people behind IGDA Estonia. I’m also really thankful to Anna and everybody who participated for the amazing work! If you want to check out the digital version of the whole magazine, you can download it here. My article appears in the 3rd issue. Enjoy!