Preparing for the Investment 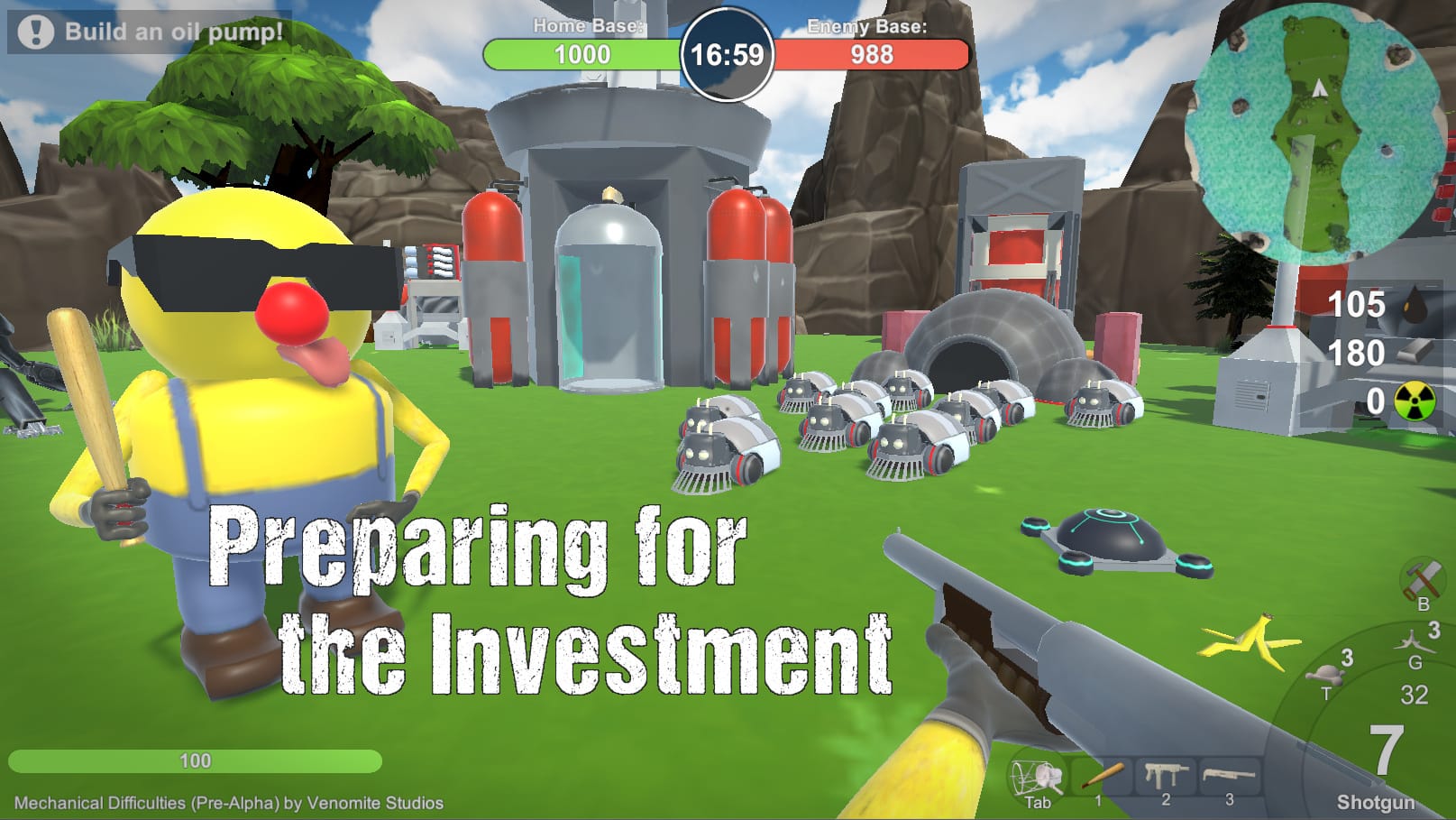 I haven’t written a blog post for long. When I look back now it seems it has even been a whole month. And even longer since I updated you about the progress of the project. As much as I like writing these blog posts I have been grinding hard to meet a deadline I set myself. I want to raise the first round of investment for Venomite Studios during this August.

A month ago I was already working hard trying to get investments. I remember sending about 5 to 10 emails each day, reaching out to people offering business partnership. There were several documents I put together describing the situation of the project, the financial plans, and the vision. I had also put together a team who I still have working on Mechanical Difficulties. But we didn’t get the breakthrough I was hoping for.

Then, while analyzing the situation with a friend I realized I had been approaching this the wrong way. Investors and Venture Capitalists receive dozens and dozens of emails each day with offers similar to mine. It’s a huge gamble to get an investment that way. I bet way over 90% of these emails go unopened, I had to take another approach.

There was one more leg that my project was limping. Several people had pointed it out to me already – the game had very many white models. The visuals were literally screaming “UNFINISHED!” and thus might have scared away several people who my offer actually reached. Even the splash screen of the game was filled with white objects. For me, it was never a big deal. It seemed obvious to put very little resources into something that will be replaced soon and that doesn’t display the core mechanic. Now I understand the white models actually broke some of the immersion and ruined the overall appearance of Mechanical Difficulties.

So I decided I needed to change two things:

How will I approach investors successfully?

I have several ideas that I’m going to try. One of which is referrals. Have you ever heard the saying “Knowing people gets you ahead in life.“? I will try to find people in my social circle who know people who want to multiply their money, therefore investing in Venomite Studios. That includes me going out to networking events and doing some mingling.

Another approach that has been cooking in my head for some time is social communities like 9gag, Imgur and Reddit. I’m a regular visitor of 9gag, but I have never posted a meme there ever. Though I have realized these communities are filled with passionate people who sometimes share their passions. Every once in a while I see a game development post there getting traction and I wonder who I might reach if I posted mine.

I will probably make a good short gameplay trailer to go with these two approaches to raise my chances of success. Because neither of these two will give people a chance to quickly see the game for what it really is.

Getting all white objects textured

Doing this was tricky at first. People recommended me to approach this in one of three ways:

The problem with getting the ready-made models online is that Mechanical Difficulties needs pretty unique assets. Every building should hint at its use and every NPC at its abilities. (For example, the iron drill should look like it is mining iron from the ground.) So after a little research, it turned out to be almost impossible to find models that fit my price range, fit the game’s style and look right.

Then I tried finding artists who would do free work for credits, exposure or anything else I could currently offer. To reach out I put an “unpaid work” ad on Unity Connect describing my situation. As it turned out all the people who replied still wanted money or revenue, the exact things I can’t currently offer.
To be clear, I don’t blame artists for wanting money for their work, that’s fair. I’ve been a freelance 3D artist myself, I know the struggle.

Needless to say, it seemed to be going nowhere. I felt that if I was to continue my searches I was going to put more energy into finding the artists than when I was to do all the art myself. So I dove straight into it. I started unwrapping and texturing all the models myself, following the principle of “Good enough for now“. There was no way I could put enough time into all these textures to make them look fit for the final game. But I could make them look “Not unfinished“, so I did.
(Most of the art, if not all, will be redone by professionals after we have secured our first investment.)

Here’s what we have now:

The weapons got textures… 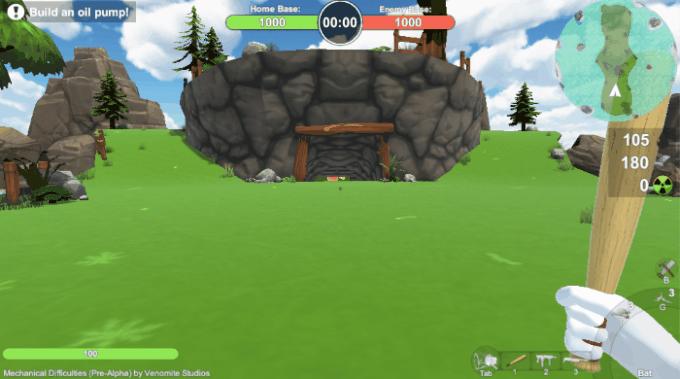 …the gadgets got textures… 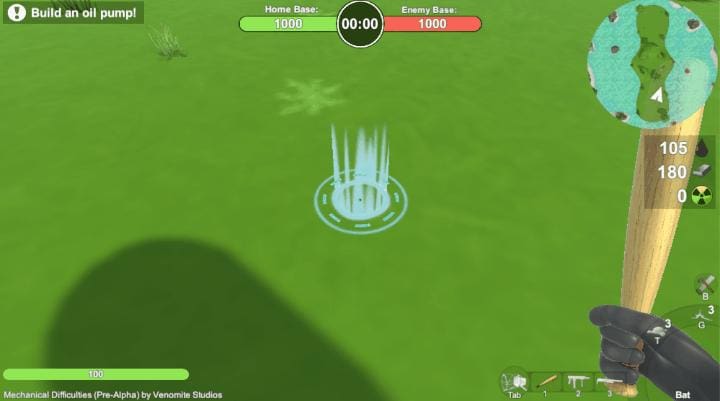 …and the buildings are almost all textured. 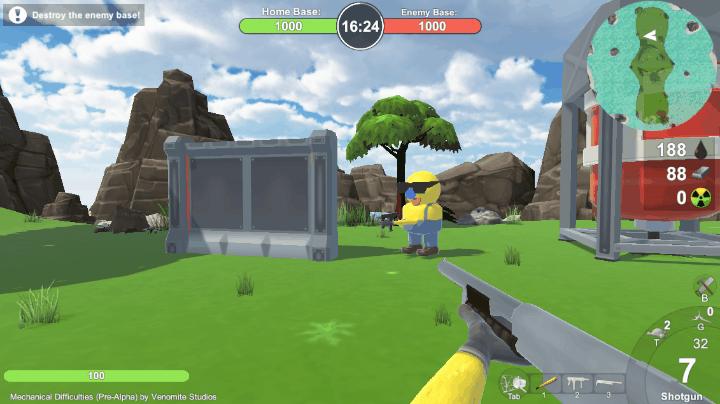 Even the player capsule has been replaced. 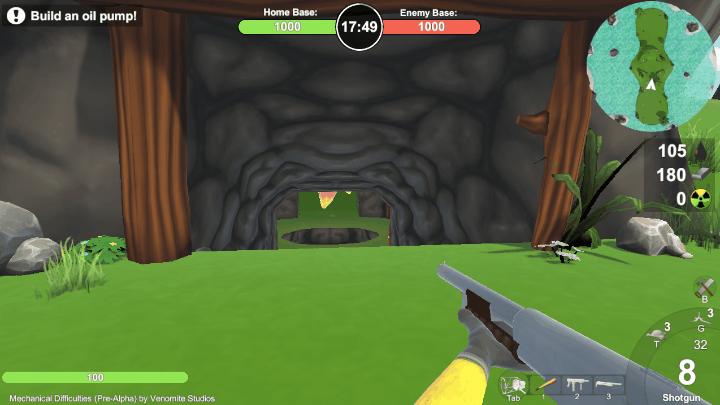 Luckily I got some help from my friend Mikk Ostrov. He unwrapped and textured the Turtle Factory model. (Picture below) And I found a free model online that can be used for the turret for now. Coming to an end of this texturing sprint I’m feeling confident. The new textures still need a little more polish, but with them and the new approach I believe we can achieve the August deadline.

If you have been looking forward to the next game development update, then you’ll need to wait a little longer. Every game development update takes about a week to make and with the current deadline the video will have to come a bit later. That being said, our team has been making some really sweet improvements and if you want to try the next version early you might want to consider becoming a tester here. We’ll be sending a new testing version out soon!