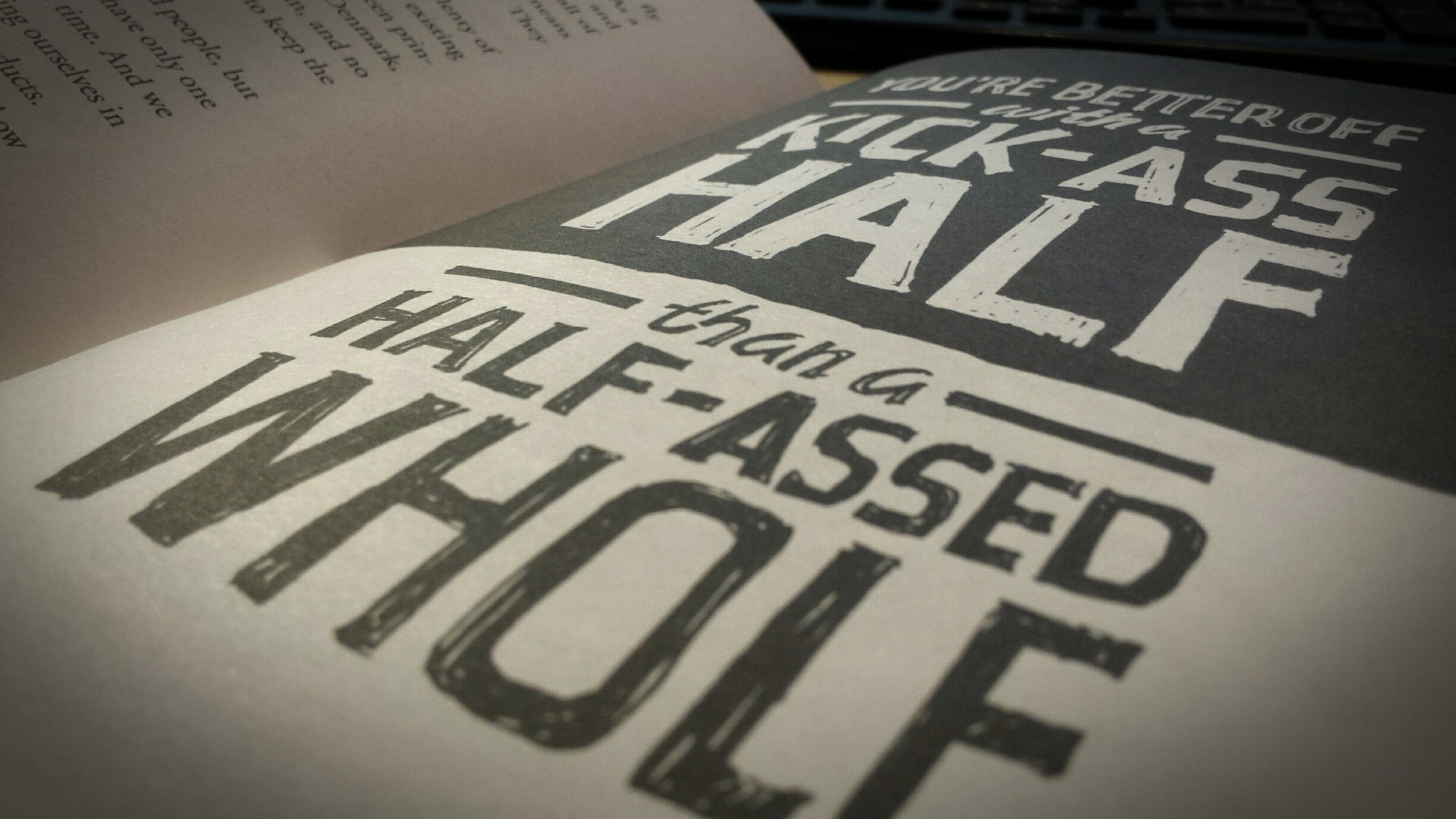 Rework, Wow! Just WOW! This book makes you rethink everything you thought about businesses and it is really well put together.

I believe I have previously mentioned I’m not on par with the usual book reader when it comes to speed. But I finished this book only 4 days after the previous one I read about Game Programming Patterns, even though the page count is about the same. The last part was, of course, an over-exaggeration. 😛 Because Rework has half as large pages and twice as many illustrations.

But what makes me feel like Rework was so much better?

Well, the writers of Rework start off by setting themselves apart from the usual businesses. They state right away that they are running a hugely successful (millions in profit) business with just 16 people. And they say “This book isn’t based on academic theories. It’s based on our experience.“.

Something so basic, so profound, something that is in most “success recipes” – planning – they discard it. So many people tell you that you need a plan to make it work, you just can’t dive in and expect everything to work. What Jason and David say about this is “Planning is guessing. … You have the most information when you’re doing something, not before you’ve done it.“. When you think about it, that is so logical. By planning you create yourself a roadmap to follow and often brainlessly stick to it, discarding possible changes based on new information and experiences as you go. I’ve been guilty of it in the past myself.

Another thing – meetings. I used to think meetings were a good way to keep communication happening in teams and relax for a little. Rework suggests that instead meetings often are a great distraction to all participants and wastes a lot of resources. That is because all people who have to attend that meeting have to stop what they are doing and later, after that meeting, continue where they left off. Continuing isn’t often a matter of seconds. I personally sometimes need like 15 minutes to get back at a difficult programming task. Another thing is when 10 programmers attend a 1-hour meeting, then that meeting just cost 10 hours of programming, plus the restarting where they left off. Meetings waste a lot of resources.

Jason and David also touched on something in Rework that is relevant to Project Number 2. They wrote, “Do you want to build just another me-too product or do you want to shake things up?“. This is what my game will be about. It will not be a copy of other previously made games, it will be its own thing. It will be something I’ve dreamed of playing for years, maybe even since I was 10 years-old. Jason and David had a chapter in Rework called “Scratch your own itch“, this is what Project Number 2 will do and I can’t wait to share it with all of you!

“Focus on competitors too much and you wind up diluting your own vision. Your chances of coming up with something fresh go way down when you keep feeding your brain other people’s ideas. You become reactionary instead of visionary. You wind up offering your competitor’s products with a different coat of paint.” from the book Rework by Jason Fried and David Heinemeier Hansson.
I couldn’t have phrased it any better. There are so many remakes and copycats, if you have a vision for a product or service, keep following that vision and don’t keep comparing yours to other successes. Theirs isn’t the only way to do it and they have already done it!

Rework by Jason Fried & David Heinemeier Hansson is an amazing book filled with valuable insights that no blog post can ever fully cover. I recommend for everyone to pick up this book and read it. I believe it would be most valuable if you are a leader or business owner, but also an incredible value in all other fields.

0
« Game Development Update #1
How Much Money Should I Ask for My Service? »