6 Mistakes That Will Make Your Startup Fail

Home6 Mistakes That Will Make Your Startup Fail 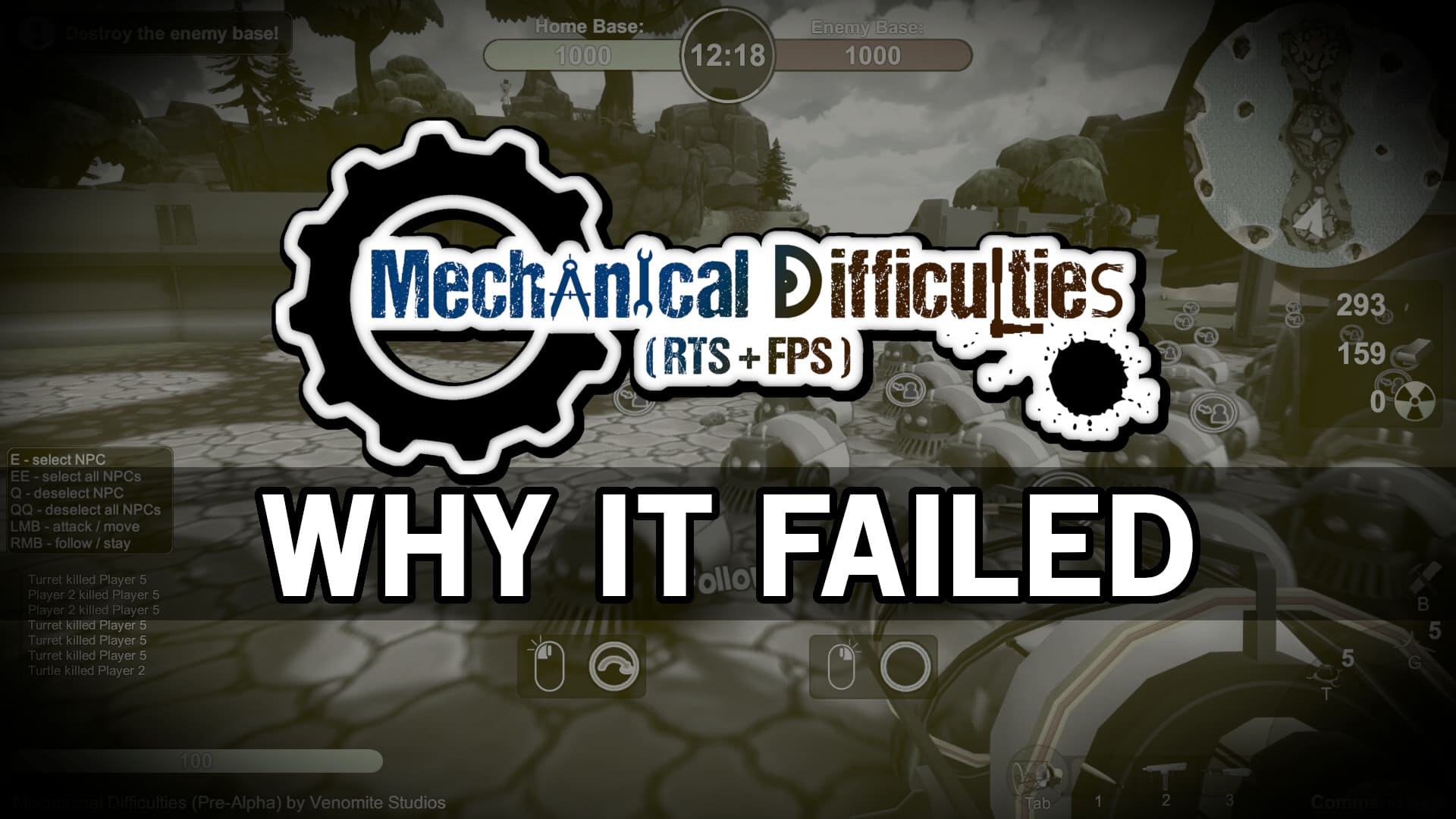 I recently shut down a project I spent 1,5 years working on, and I decided to point out the 6 mistakes I made that made my startup fail.

I was trying to build a video game called Mechanical Difficulties. A game that combined the first-person shooter genre with the real-time strategy genre. The plan was to find financial support from several investors while building the game. If you haven’t been following this blog so far, the result of a 1,5-year long work was:

Now I’m writing this article in hopes that it will allow me to learn more from my mistakes and help you avoid making the same mistakes I did.

#1: Putting Too Much Effort into Online Marketing

Online presence was a big part of Venomite Studios while we were building Mechanical Difficulties. I had the belief that through regular public content creation we would have no trouble in achieving our goals. I believed that it will grow an active audience around the game and eventually attract the required investors to make it all possible.

Don’t get me wrong, making blog posts and youtube videos did have an extremely positive effect on the project, and above all, I loved creating them. But for the project to stay alive we needed funding, and putting so much effort into creating content didn’t help us reach that goal.

In addition to that, behind the scenes, I spent loads of time trying to reach possible investors and publishers through online channels. I must have sent hundreds of personal emails and messages trying to reach people. But as a result, about 1% of them replied and none of them were eventually interested. My bet is that it’s because they all get bombarded with hundreds of digital messages every day, and they just can’t handle them all.

So instead of putting so much time into online marketing, what I should have done was – travel abroad to investor networking events and (game) conferences, and find business partners there.

#2: Pitching to the Wrong People

For me, raising money and pitching to investors was a totally new world. So a big part of the time I was just feeling my way around the dark. There was crowdfunding, investors, publishers, accelerators, and mixes between all of those above.

Know your audience! I spent a lot of effort pitching in Estonia. A big mistake, because I was trying to raise a big sum of money. Unfortunately, the Estonian investors usually don’t have that much money to invest and have very little knowledge of the game development industry. In Estonia, game development is a rather new topic in general. And there aren’t many success stories because most game dev companies there are very young.

So make sure you pitch to the people who could actually give you the money you are trying to raise. Otherwise, you are wasting a lot of your energy on work that will not get you closer to your goal.

When planning to raise money – first do your homework, and then put all your efforts into pitching for the correct one.

#3: Trying to Raise Too Large Amounts in the Beginning

This must have been one of the biggest mistakes I made! I had calculated the approximate sum of money that was needed to complete about 80% of the game. And I was trying to raise it all at once in the first investment round.

I had a bunch of impressive work and results to show that spoke in my favor, but I was trying to raise a few hundred thousand euros. And that scared many investors away.

Instead, I should have done it in baby steps. I should have raised just 10,000 € and used that money to show what we could achieve with funding. Then go out and raise even more to make the game even better. And then more to completely finish the game. Baby steps!

For the investors, it is a big red flag if there isn’t a well-functioning team in place. And for that reason, I must have failed to raise funds on more than one occasion. That must have also been the biggest reason to eventually drive me to burn out altogether.

For the majority of the time, in our project, there was only me who was making everything happen. I was doing development, art, marketing, and business development. This resulted in me working inhumane hours and eventually getting burned out.

You should be in a position where you can insert confidence in the investor. You should be able to show that the current team can work well together and can already produce something good. So in case, something happens to one team member, the others can keep the project going.

What I should have done was delegate lots of the responsibilities and focus mainly on my strengths.

One of the reasons I struggled in finding an investor and in putting together a team – I was too jealous. I wanted to be the hero who built something so amazing and thus be rewarded for it accordingly.

If you want to be successful you should learn to manage your ego. People will help you make great things happen if you let them. But then they are also those to thank for, and they deserve recognition and a fair share of the profits.

#6: Taking on a Too Big Project

I am not the type of person that usually believes that some project can be “too big”. I’ve always believed that it just takes more focus and work to stay motivated on a bigger project.

I also don’t believe in the “fail-fast” mentality, because I don’t see the point in having 20 failed games. Especially when they have pretty much the same mechanics and none of them really did any better than the previous one.

True, I’ve only had two failed projects to learn from during the past 4 years, but I’m pretty sure I learned more than I would have if I failed with 20 small projects doing the same thing over and over again.

Recently I came across a video by Matt D’Avella that talked about Burnout. In there he mentioned that every project should have a sprint mindset. Whether it is defined by a deadline or the amount of cash you have to spend – there is always a limited runway.

That sparked a thought in my head. A project’s runway can also be limited by the amount of passion you have for it. If you spend that passion in an unhealthy way it can run out before the project becomes self-sustaining.

The fact that I kept grinding through the Mechanical Difficulties project with way too long hours and without delegating any of the tasks, made the project too big for me. I just burned through the passion too fast, before I could make something out of it.

So if you are to take on an enormous project, make sure you have a team to help you carry the weight. And keep in mind to sustain healthy work hours that keep your passion fresh.

Like I mentioned in my previous post about failure, I believe that failing can be a good thing. So hopefully this blog post was a chance for you to learn from my mistakes.

Until next time, Cheers!